Gingivitis comes about due to the short-term consequences of plaque accumulating on your teeth, and this can cause inflammation. This inflammation usually entails red or swollen gums and bleeding when brushing teeth or biting food and is the body’s reaction to bacteria that has built up on the teeth.

If the aforementioned gingivitis is not dealt with then periodontitis can occur, this is a severe gum infection which damages the soft tissue. It can also damage the bone that supports your teeth if left untreated and subsequently lead to teeth loosening and eventually tooth loss. Let us take a closer look at the symptoms associated with both diseases so you know what to look out for

The symptoms of gingivitis and Periodontitis

There are various symptoms of gingivitis and some of these include:

What are the risks associated with these diseases?

There are several risk factors for gingivitis, among these are:

The best treatment for gingivitis is to make changes to your daily habits, essential to this is brushing your teeth at least twice a day, flossing daily and using mouthwash. Additionally, regular dental and hygienist visits should occur, as well as professional treatment for issues such as misaligned teeth.

Periodontitis on the other hand will require different treatment, and this is also based on the severity of your condition. In some scenarios your dentist can recommend non-invasive procedures such as a scaling to remove build-up on your teeth and below your gum line. This can also include root planing which discourages plaque build-up by smoothing out the surface of the roots of your teeth. If the gum infections remain and they aren’t responding to professional hygiene, then antibiotics may need to be prescribed.

Surgery can be required if the inflammation still persists in sites which are inaccessible to brushing and flossing. This can be in the form of flap surgery, in which the deposits under your gums are cleaned. Additionally, if you have had bone loss then bone grafting may be carried out with the flap surgery, in order to restore the lost bone.

If you would like further advice on either condition, our practice is committed to educating patients manage gum disease as it is the UK’s leading cause of tooth loss. Please do get in contact with us if you want to know more about either of the conditions mentioned in this article. 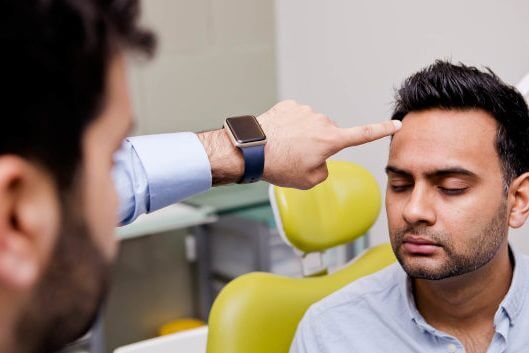